One of the first vegetables to harvest in the spring is asparagus. Native to coastal regions of Europe and Asia, asparagus is a hardy perennial vegetable crop, drought and salt tolerant, and once established it can remain productive for 15-20 years.  Asparagus are a dioecious crop which means it has a male and female plant. However female plants produce lot of berries and their seedlings can become weedy in the bed. It’s best to grow male plants as they produce large number of uniform small spears and are relatively easy to manage in the bed. Popular male cultivars to select are Jersey Giant, Jersey Knight, Jersey Supreme, Jersey Prince, Jersey Queen, and Jersey Gem. Purple color asparagus cultivars like Purple Passion and Pacific Purple are also available in garden centers, and research trial studies have shown that they tend to produce large size spears, but don’t yield a lot compared to the Jersey series. Also their spear coloration doesn’t last when cooked. 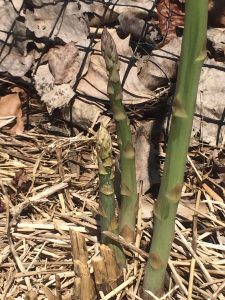 To start an asparagus bed, select a full sunny spot in your vegetable garden that has well drained soil. Avoid low lying spots or soggy wet areas, as they tend to develop crown/root rot disease in asparagus. Choose the bed at the north side of your garden so it doesn’t block sunlight on smaller plants. For easy maintenance of an asparagus bed, adopt weed control measures at least a year before spring planting. In spring, once the temperature starts to warm up and the soil begins to dry out, till the bed along with organic matter like compost or rotten manure to a depth of 6 inches.

For asparagus planting, use one year old crowns that are commonly sold in many garden centers and are best to be planted in early to mid-spring. Dig a shallow trench of 6 inches deep, 12-18 inches wide in the tilled bed, and set the crown in the middle of the trench, with its roots wide spread out. Space the crowns 12 inches apart. Incorporating bone meal in the trench before placing the crown is optional. Bone meal helps in better root establishment of the plant. Fill the trench initially with 2 inches of original soil, and as the spears start to emerge, gradually fill the trench with soil. By the end of the first year, make sure to fill the trench completely with original soil. In sandy soils, you don’t have to follow the gradual filling of the trench. After planting, water the bed thoroughly, and during the remaining growing season, water the patch once a week to an inch deep.

It is normal to expect spindly fern during its first year growth but as the plant matures in the second or third year, it develops thick, upright stems. Typically, spears emerge when the soil temperature reaches 50°F in spring.  For quick establishment of the asparagus patch, don’t harvest the spears in the first year. You may harvest them in second year, but its best to wait until the third year to harvest. If you decide to harvest in the second year, schedule your spring harvest of spears for only 4 weeks.  During the third year and thereafter, you can harvest the spears for 8 to 10 weeks in spring.  Harvest the spears that are a little larger than pencil size thickness and are about 6-8 inches in length.  Bend the spears at the base and snap off at the soil surface. Immediately after final harvest, fertilize the asparagus patch with balanced nutrients (like 10-10-10 or organic fertilizers like chicken manure).

Weed control in an established asparagus path should be started early in the season before the weeds emerge in the bed. Organic pre-emergence herbicide like corn gluten mean can be applied in spring to prevent germination of annual weed seeds. Hand hoeing or shallow cultivation (no deeper than 2-3 inches) between rows can help to control annual weeds. Another option would be mulching the rows and around the plants after final harvest when the new spears emerge. You can use pine needles, clean straw, or bark chips to a depth of 3-4 inches to smother the weeds. Grassy weeds in the patch can be controlled using selective herbicide like Poast, but it should be sprayed on actively growing grass and should not be applied more than twice in the season.

In fall, don’t cut back the dead stalks of the asparagus as they can capture snow and insulate the crown further, plus it adds winter interest. Clean the patch in early spring before the spears emerge. You can also integrate asparagus in an edible landscape, as a hedge row to create a border effect or as an accent plant in the perennial landscape.

For any garden inquiries, contact us at planthealth.advisors@extension.wisc.edu or call/text at 608-298-6945. For more info, visit us at: go.wisc.edu/planthealthadvising

We teach, learn, lead and serve, connecting people with the University of Wisconsin, and engaging with them in transforming lives and communities.

Connect with your County Extension Office »

Find an Extension employee in our staff directory »

An EEO/AA employer, University of Wisconsin-Madison Division of Extension provides equal opportunities in employment and programming, including Title VI, Title IX, the Americans with Disabilities Act (ADA) and Section 504 of the Rehabilitation Act requirements.